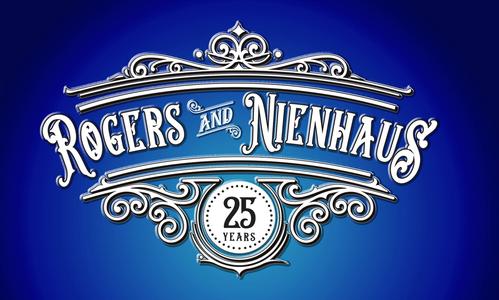 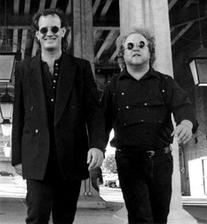 Two exceptional musicians with a lifelong career of performance on the world stage, ROGERS & NIENHAUS are just that.....world-class!!! With pristine harmony and searing instrumentation, they are truly a 'not to be missed' act, whether performing as a duo or with The ROGERS & NIENHAUS Band. Terry Jones Rogers & Scott Nienhaus have been performing together since meeting in Nashville,TN in 1993, when Terry invited Scott to join the newly formed group, The Byrds Celebration, along with Byrds alumni Skip Battin and Gene Parsons.  Both Terry and Scott had storied pasts when they began their long career working together; Terry's Macon,GA roots, recording at famed Capricorn Records Studio with The Pound & Rogers Band and touring the world with classic rock veterans; and Scott's St. Louis,MO roots with his band, Blueberry Hill Records recording artists Acousticity, and touring the world with The Nicolette Larson Band. Now based out of the St. Louis Metro area, ROGERS & NIENHAUS have become local favorites with their fiery performances and flawless harmonies, as well as performing national and international engagements.

Terry Jones Rogers and Scott Nienhaus began their long association in 1993 after both relocated to Nashville,TN at the urging of their mutual friend Michael 'Supe' Granda of The Ozark Mountain Daredevils. Nienhaus and Granda had become friends in their home state of Missouri, when Scott's group 'Acousticity' toured with 'The Daredevils' as their opening act, soon leading to 'Acousticity' working with Nicolette Larson as her band.
Rogers and Granda became friends when they worked together in the classic group 'The Byrds' with original drummer Michael Clarke. Terry was invited to join the newly reformed group by Clarke in 1988 after becoming friends in Hilton Head,SC, and was fronting the band when Supe came on board. Soon after Granda's inspired introduction, Rogers invited Nienhaus to join the newly formed group 'The Byrds Celebration', after Michael Clarke's untimely death in December of 1993. In early 1994, Rogers & Nienhaus began working with 'The Byrds Celebration' along with Byrds alumni Skip Battin and Gene Parsons, as they embarked their first tour of Europe, including Germany, Switzerland, France and The Netherlands.

In 1995, Rogers & Nienhaus released 'The Rogers/Nienhaus Band with Skip Battin' "Empty Room",recorded at Music Masters Studio in St. Louis,MO, leading to many European tours as an acoustic duo in support of this project. Numerous cafes and clubs in Amsterdam and other parts of The Netherlands, and 'The Anker' in 'Interlacken,Switzerland were favorites and always included many return engagements.

​Living in Nashville,TN provided many opportunities for the duo, including The Real Macaws, which featured Rogers & Nienhaus, along with Supe Granda, Vince Barranco, and world renowned fiddler,Vassar Clements.

​After Skip Battin retired from touring in 1997, Michael Curtis joined The Byrds Celebration along with drummer Tim Politte and continue to tour the US, Europe and South America. Also, with the addition of Michael Curtis, come some Curtis Brothers classics, like "Southern Cross" recorded by CSN, and "Blue Letter" recorded by Fleetwood Mac. Don't miss an opportunity to catch this truly great band, as they transport their audiences back to the hey day of the 60's and 70's!!

​Now living in the St. Louis Metro area, Rogers & Nienhaus have become local favorites, with their fiery performance and pristine harmonies, as well as national and international engagements. Michael Curtis and Tim Politte of Younger Than Yesterday often join Scott and Terry in intimate club settings as well as special concert performances around the St. Louis Metro area and beyond. Next year in 2022 Younger Than Yesterday  have been included in an amazing lineup of groups from the 60' & 70's on the sold out Flower Power Cruise 2022. Also look for performances of The Rogers & Nienhaus Band with drummer/vocalist Tim Politte, and Bill Murphy on keys/accordian and vocals, and David Torretta on bass guitar.
Scott, Terry and Supe Granda in 2011 revived their old group, The Real Macaws and have recorded and released a new CD titled "STANDING ALONE" with Terry Jones Rogers, Scott Nienhaus, Tim Politte and Michael Supe Granda....along with special guests, Rusty Young, John Mondin and Jim Manley!!

​Also Rogers & Nienhaus have been in the studio, at Music Masters in St. Louis, with YOUNGER THAN YESTERDAY,  Terry Jones Rogers, Scott Nienhaus, Michael Curtis and Tim Politte, completing a long awaited CD, that was released on May 31st of 2013 at the historical Wildey Theatre in Edwardsville,IL!! Even a tornado couldn't interrupt their performance for more than a few minutes, as YOUNGER THAN YESTERDAY completed the show totally acoustic for their sold-out crowd!!

Writing and recording new material is always a continuous part of their daily lives, including new recordings in 2020 and 2021.  They have appeared on various recording projects, such as Jock Bartley of FIREFALL's  first solo record, BLINDSIDE. Rogers & Nienhaus, along with former bandmate, Karen Crawford, also appear on the Poco tribute CD, titled, 'Down to the Wire', released in 2008, on Paul Cotton's label performing the Timothy B. Schmitt song "KEEP ON TRYING". Scott Nienhaus can also be heard singing and playing multi-instruments on Pat Liston's, of Mama's Pride, first solo CD, 'Blue Mist', and Rogers, Nienhaus & Crawford also appear on Pat's 2nd solo CD, 'Dreamer'.

Don't miss any opportunity to catch ROGERS & NIENHAUS in any of their incarnations!!!